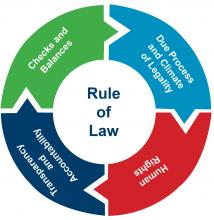 Proponents of Parliamentary supremacy contend that parliament as the representative of the will of the people should rein supreme over other organs of the state. Indeed of the three branches of Government Parliament is theoretically the most most powerful. Parliament can repeal any statute and amendment any provision of the Constitution and therefore, proponents of Parliamentary supremacy are right about the power of parliament to uphold or undermine the rule of law. Except in openly authoritarian regimes where there is no pretense of democracy in most states, democratic and authoritarian a like there is some sort of Parliament that exercises the legislative powers of the state. In authoritarian regimes the legislature is perverted to legitimatize the oppressive policies of the dictatorial regime as having the backing of the representatives of the people. Even in regimes such as Iran and china, there are staged elections where the people purportedly elect their representatives to Parliament.

The truth of the matter is that parliament has immense power. It can impeach and remove the president. It can impose taxes and appropriate revenue. Parliament can even override the Presidential veto. You are then probably wondering why legislatures world over become rubber stamps of whatever scheme the executive wants to accomplish. For example during the Trump administration, the Republicans in the house of representatives and the Senate failed to act as president trump engaged in corrupt bargains, eroded decades of Presidential norms and openly threatened to refuse to allow a peaceful transition of power. The Republicans only turned against President trump when he lost the election and most of them actually still refuse to criticize him even after the capitol hill attacks and his baseless election fraud claims. The reason the Republicans refused to criticize president trump or remove him from office is because he was popular amongst the core Republican voters who control the representatives’ political future. Politicians put one thing above everything else, .i.e. their political survival. They care more about their political survival than the needs of the the people they represent or the well being of the state and its citizens.

The judiciary is also prone to compromise by the executive because in most countries judicial appointments are made by the executive. Therefore, the judiciary is usually compromised and corrupted by appointing corrupt and partisan loyalists. Without proper safeguards such as judicial independence, the executive usually appoints partisan loyalists who are usually corrupt but loyal to the authoritarian regime rather than to the rule of law. In such circumstances, the judiciary due to corruption or incompetence or threats and intimidation also becomes complicit in the oppression of the citizens. A compromised judiciary fuses itself with the executive and parliament and the three branches of Government conspire to torture, kill, imprison without trial, silence, rob and oppress their fellow country men.

In such circumstances, the only safeguard against tranny and oppression in any state is an independent, courageous and effecient judiciary. However as we have seen in many authoritarian regimes, the judiciary is also often compromised and silenced. There is no safeguard against corruption and compromise as effective as the personal courage, virtue, strength and character of the judicial officers. In many countries, the judiciary has security of tenure and therefore, unless judicial officers allow themselves to be corrupted and compromised, they can operate independent of the executive without fear of losing their jobs. However, personal ambition and interests, threats and corruption usually lead to the compromise of the judiciary. In authoritarian states, if the executive can not corrupt you then it will ensure that you preside over a worthless court deep in a remote part of the country. However, those that play to the tune of the executive are given posh or lucrative postings in terms of location, disputes handled, impact and visibility. On the other hand, those that are independent, virtuous and courageous are thrown in remote areas where they are basically voiceless, silenced and insignificant with no hope of career advancement or making decisions that have any meaningful impact. In the end such people become frustrated and leave judicial service or decide to join the dog eating. As the old adage goes, if you visit dog eating country, you either leave or join in the slaughter.

Those judicial officers that respect the nobility of judicial service and the impact of delivering justice to the oppressed, are the difference between law abiding citizens being victimized, tortured and unjustly imprisoned. The importance of an independent and effective judiciary was explained by Lord Bingham in Liversidge v Anderson : The Rule of Law Amid the Clash of Arms (2009) 43 The International Lawyer 33, 38. He said that –

“we are entitled to be proud that even in that extreme national emergency there was one voice – eloquent and courageous – which asserted older, nobler, more enduring values: the right of the individual against the state; the duty to govern in accordance with law; the role of the courts as guarantor of legality and individual right; the priceless gift, subject only to constraints by law established, of individual freedom.”

It is only when you have judicial officers who can put aside personal ambition and remain strong in he face of threats and bribery that you can have a strong and independent Judiciary. It is the duty of the judiciary to ensure that personal libery is not compromised even by threats of war or insecurity or emergencies or terrorism. According to the UKSC, “even in the face of the threat of international terrorism, the safety of the people is not the supreme law. We must be just as careful to guard against unrestrained encroachments on personal liberty”. Though the Government is free to take extraordinary measures in the face of emergencies to protect the lives and livelihoods of citizens, it should not come at too high a price. When citizens give up their liberty in the name of security, they up end losing both. When the executive, must limit individual liberties, it must do so only to the extent that it is reasonably necessary and for the shortest time possible. However, a compromised, weak and corrupt judiciary will collude with the executive against the liberties of the citizens.

The final arbiter of what is reasonable and necessary should always be the courts rather than the executive or Parliament. The rule of law means that neither Parliament nor the executive are above the law. Since the judiciary has the power of interpretation and judgment it should have the final word on whether there has been a violation of personal liberties. According to Lord Hoffmann in R v Secretary of State for the Home Department, Ex p Simms [2000] 2 AC 115, 131, If the rule of law is to mean anything, decisions as to what is necessary or expedient in this context cannot be left to the uncontrolled judgment of the executive. The judiciary as the guardian of individual liberties should always give any restriction on individual liberties its most constrained interpretation and construe individual liberties as widely as possible. Constraints on individual rights should be as clear as possible and any ambiguity however slight should be resolved in favor of the individual. The courts should always remember that Parliament does not legislate in a vacuum: statutes are drafted on the basis that the ordinary rules and principles of the common law will apply to the express statutory provisions. Therefore, a power conferred by Parliament in general terms is not to be taken to authorise the doing of acts by the donee of the power which adversely affect the legal rights of the citizen or the basic principles on which the law is based unless the statute conferring the power makes it clear that such was the intention of Parliament. As Lord Hoffmann said in R v Secretary of State for the Home Department, Ex p Simms[2000] 2 AC 115, 131:

Fundamental rights cannot be overridden by general or ambiguous words. The absence of any indication that Parliament had the imposition of restrictions on the freedom of individuals in mind when the provisions of the 1946 Act were being debated makes it impossible to say that it squarely confronted those effects and was willing to accept the political cost when that measure was enacted.

Whatever the circumstances, the executive is always trying to find the magic trick that lets it remain in power and prevent political opponents and other individuals from challenging the status quo or from selling their point of view to the public. The executive will spy on, arrest without reasonable cause, torture and weaponize criminal law against it’s perceived enemies at given any opportunity. In the circumstances, the judiciary must always remain alive to its duty to protect person liberties and ensure the existence of the rule of law. When you let the executive constrain the ideas you hate tomorrow it will come after the ones you love because in politics there are not permanent friends but only evolving interests.