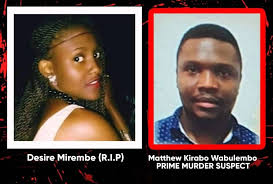 In Uganda v Kirabo Mathew HCT-CRIMINAL SESSION CASE NO. 434 OF 2015 Justice Henry Kawesa convicted Kirabo Mathew of the murder of his girlfriend Mirembe Desire. With due respect to the loss by Desire’s family and the judgment by the learned trial judge I am of the view that Kirabo was entitled to an acquittal.

Due process of the law requires that a suspect should be treated fairly and lawfully during investigations by law enforcement agencies. This implies that the suspect should be afforded all Constitutional protections available to him or her as much as possible within available resources and technology by the state. On the other hand, the court has the right to prevent the abuse of the court process where the state wilfully ignores the law and acts oppressively towards the suspect. Even though there is no express statutory rule in Uganda that excludes evidence that is illegally obtained by the police, such a rule can be implied from Article 28’s due process protection but the courts of record have not recognized such a broad rule. The courts have the discretion to exclude evidence that would lead to an abuse of the court process or compromise the integrity of the proceedings. See R v Sang.

The need to protect citizens from abuses of power by law enforcement agents needs no explanation. Do I really have a right against self incrimination if the state is allowed to pressure and coerce me into a confession. The rules in respect of confessions and charge and caution statements predate the enactment of the Constitution and therefore, there is need to update them to reflect the Constitutional protections afforded to suspects. If court is obliged to inform an accused person that he has a right not to testify in his defense or give in unsworn testimony, why should the state not have a duty to inform the accused person of his right against self incrimination. Kirabo purportedly signed a charge and caution statement but failed to sign the page where the caution was administered. He was video tapped confessing to the crime and showing the police how he planned and executed the murder of his girlfriend but conveniently there is no video of the charge and caution statement and the events leading to the confession. The most foul proof way to ensure that a charge and caution had been administered is to ensure that the accused is given an opportunity to consult with counsel (an officer of court) or for the confession to be recorded before a magistrate or for the charge and caution to be administered on video. The trial judge rightly stated the rules of circumstancial evidence but discriminatively applied them against Kirabo. The fact that the caution and charge page was not signed corroborates the contention that the confession was not voluntarily made. Circumstancial evidence in form of the failure of the police to video tape the caution being administered and the fact that the police conveniently filmed only the parts of their interactions with the suspect favorable to their case also corroborates the fact that the caution might not have been administered. Even the delay in administering the caution corroborates the involuntariness of the confession.

The previlege against self incrimination means that a person can only lawfully incriminate himself or herself after the state has informed him or her of his or her right not to incriminate himself or herself and the suspect voluntarily waives that right and decides to confess. Police tactics of coercing or otherwise inducing suspects to incriminate themselves without informing them of the Constitutional protection are an abuse of state power that courts have no business condoning.The right to a fair trial applies from the moment a person is arrested by the police to the conclusion of the trial. It is properly refered to as the right to due process of the law. It involves both procedural due process that requires the state to follow all procedure prescribed by law and substantive due process which requires that a person should be treated fairly in all proceedings against that person and to be given the benefit of all laws and previleges thereunder.

Kirabo may as well have killed Mirembe but it is the duty of court to ensure that Kirabo gets a fair trial. A fair trial is one of the most important freedoms to human dignity because allegations are merely just that until proven beyond reasonable doubt before an impartial tribunal in a fair trial. We should never compromise the right to a fair trial to get the results we feel we should get against Kirabo because next time the rules will be bent against an innocent man. The evidence on record in the case indicates that Kirabo may not have voluntarily made the confession used against him and that it was obtained in violation of his fundermental rights. Defense counsel ably pointed out contradictions in the confession that when read together with the circumstantial evidence above shows that there is reasonable doubt about the voluntariness of the charge and cautioun statement. Since the state has the duty to prove beyond reasonable duty that the confession was voluntarily made in line with the relevant Constitutional protections, the state failed to discharge that burden. In the circumstances I respectfully dissent.