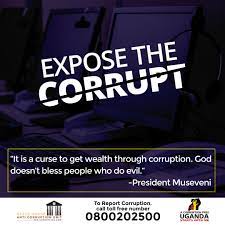 In countries like china, cuba, indonesia, mororcco, thailand, vietnam and other countries corruption is a capital offence punishable by death penalty. In China public service corruption is low because the law on corruption is strictly enforced and the there is a public culture that discourages corruption. It is not true that imposing a death penalty for Corruption on its own will reduce or eliminate corruption in Uganda. It might actually cause more than good when it wielded as a political weapon against members of the opposition, dissedents and other political opponents. By contrast countries like Denmark have low levels of corruption without imposing a death penalty for corruption. There success in effectively combanting corruption is due to good governance, high literacy levels, public morals and effective enforcement of the law which deters corruption. It is possible that even in one hundred years Uganda will still have an illiterate population, poor governance, poverty and weak rule of law. Therefore, waiting for Uganda to have such attributes is pure foolishness. Maybe we should give the deterrent effects of a death penalty a chance.

The essence of the theory is that the threat of being executed in the future will be sufficient to cause a significant number of people to refrain from committing a heinous crime they had otherwise planned. Deterrence is not principally concerned with the prevention of further killing by an already convicted death-penalty defendant. Opponents of the death penalty argue that it is cruel, it is expensive to administer, has potential for errors that can not be corrected and that it is not as deterrent as claimed.

Some guided souls argue that a death penalty has not deterred capital offenses such as murder, aggravated robbery and other such offenses. These people are misguided because such offenses amongst the educated are rare but remain prevalent amongst the illiterate population. She people underestimate the power of self preservation and the fact that we don’t go around killing those we hate because of the dire personal consequences it would lead to, worse of all a death penalty. These people also forget that corruption is committed by public officers who are often highly educated individuals with a high affinity for self preservation. These often make calculations before they plunder public resources and most of them engage in corruption because they know they will get a slap on the wrist and get away with it. On a certain level it is correct that a death penalty has to be complemented by a serious asset recovery regime otherwise people will allow to die provided their descendants will retain the illicitly acquired wealth.

Another complementary strategy for deterring corruption is consecutive sentences. In Uganda the highest sentence for corruption is 14 years imprisonment but courts even rarely sentence a person to ten years. This can be solved by applying the rule in Section 122(1) of the Trial on Indictments Act. Under this section, where a person after conviction for an offence is convicted of another offence, either before sentence is passed upon him or her under the first conviction or before the expiration of that sentence, any sentence of imprisonment which is passed upon him or her under the subsequent conviction is to be executed after the expiration of the former sentence, unless the court directs that it shall be executed concurrently with the former sentence or of any part of it. According to Justice Mubiru in Uganda v Kayondo, Criminal Session No. 477 of 2015, the court may impose a concurrent sentence rather than a consecutive one;- when the accused is convicted of (or pleads guilty to) multiple offenses in the same case; when all the convictions are connected to the same or similar facts; situations where imposing consecutive sentences will result in a cumulative sentence that is too high so as to be disproportionate to the level of the convict’s  culpability; to avoid a multiplication of penalties for the same criminal conduct; where act or omission is punishable in different ways by different criminal statutes, so as to ensure it is be punished under either but not both, and so on. Parliament can modify this rule to apply to every corruption offense whether flowing from the same facts or not. By making sentences for corruption offenses consecutive as a matter of law they become deterrent. For example impose a minimum sentence of 30 years for every corruption offense. Lenient sentences make corruption attractive because they reduce the price to be paid for plundering public resources. Very high sentences on the other hand are deterrent because they make the price for corruption very high. When a corrupt person is evaluating whether to be corrupt a high likelihood that he or she will spend decades in jail if caught will make it very likely that the person forgoes plundering public resources. With lenient sentences a corrupt person plunders public resources, illicitly enriches himself or herself and return from prison a few short years later to enjoy his or her loot.

Impose a minimum fine of 1,000 times the money plundered by the Public officers in issue or Ushs 2 billion or whichever is higher. Very high minimum fines are deterrent because they allow the state to recover illicitly acquired wealth without first proving that it is proceeds of the corruption. Since it is difficult to trace illicitly acquired wealth and seperate clean assets from illicitly acquired assets, high fines allow the state to recover illicitly acquired wealth without going through the expensive process of connecting the assets to the crime. In addition, to minimum fines there should be minimum sentences to reduce the discretion of judicial officers who in Uganda are part of the problem of corruption. Minimum sentences ensure that those inclined to engage in corruption have notice of the serious and grave consequences of their conduct. A corrupt public officer will think twice before plundering public resources if he or she is aware that the consequence on conviction is imprisonment for life or 40 years. This is even more deterrent if he or she is aware that a large fine will ensure recovery of most of the illicitly acquired wealth.